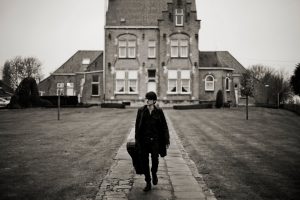 If the artist name Tiny Legs Tim reminds you of the bluesmen of old, then you’re immediately on the right track. Tiny Legs Tim (Tim De Graeve, °1978) is nicely on his way to become one of the Belgian blues musicians of the moment. The rambling old guitar of his grandfather, a bottleneck, a footstomp and the necessary scratches in body and soul ensure a personal style and endurance. After 6 years of inactivity because of illness, the blues he discovered as a child is more alive than ever.

The past few years, Tiny Legs Tim travelled with his One Man Blues Band through nearly the entire European continent, played the opening act for Peter Doherty, John Mayall and Ian Siegal, performed at many blues festivals and was invited last year by no-one less than Kurt Overbergh (Ancienne Belgique) to play during STOEMP v/d Chef.

Read what Roland van Campenhout has to tell about this young bluesman: “Ever since dah blues crawled out of the southern muddy waters, the men spreading the word had special names. We had a Blind Lemon, a Sleepy John, there was a giant human being called Leadbelly, and many more…. Their 78 rpm disk recordings went all over the globe, influencing popular music and young musicians from London to Singapore, From India to Africa… So now we have from Belgium a young man who names himself Tiny Legs Tim, and just with his six strings and a stomping foottapboard he brings back the ghost and magic from Bukka White and Robert Johnson. Sit back and let the ol’ magic take hold. Those tiny legs sure take a lot o’ burning blues around!”